”We Won’t Give Opposition Chance To Rule” President Goodluck Jonathan

President Goodluck Jonathan said yesterday that his government would not give the opposition the opportunity to rule Nigeria. 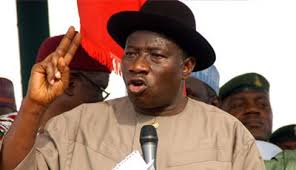 Jonathan made the assertion while launching the Peoples Democratic Party Wards’ Volunteer Scheme at the Presidential Villa in Abuja. targeting the grass-roots using about one million volunteers.
He accused some people of bitterly criticising his government because of their ‘frustration and guilt’.

The president continued: “And I always say that when you see people talking and you see the bitterness in their hearts, you see the frustration, the anger, and you see them as people who are already feeling guilty, if you don’t have a forgiving heart, if you don’t have a clean heart, you cannot rule Nigeria because you cannot give out what you don’t have.”
Jonathan said the PDP had set standards in governance which the opposition could not match because they never had governance experience at the federal level.
He also asserted that the PDP was the only party with members at every voting unit, but lamented that leaders and members of the party had not been marketing its achievements.
“If you go to agricultural sector, transportation sector, education sector, petroleum sector, we’ve opened up the sector such that it has created a lot of room for the big boys in the Nigerian oil sector.
“There is no other party whether two, three, four, five parties coming together. They cannot reach that level. PDP has members in every voting unit in this country,” he said.
ShareTweetPin
Previous Post

RESEARCH:…The most efficient way to improve your grades is to Learn More and Study Less:

The housemate is being trolled on social media for washing his love interest's panties ByJayne Augoye September 24, 2020 1...

I Will Fight Corruption To Standstill With CAMA Act, 2020 — Buhari Opens Up At Last

BREAKING: Why We May Not Go On Strike, NLC Makes U Turn, List Conditions