There are two reasons for the legal opinion. They are that:

•no law or regulation compels political appointees to proceed on terminal leave; and

•the timing is “inauspicious and not strategic”.

Faced with the legal obstacle, the Presidency may have dumped the option of asking Jega to go on leave.

Besides, President Goodluck Jonathan has said although he has the power to remove Jega, the INEC chief has not done anything to warrant his removal. 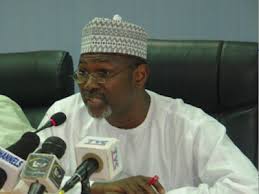 A top government official yesterday said Jega will not be removed or asked to go on leave.

But the comment of the supervising Minister of Information, Mr. Edem Duke, has caused disquiet in the cabinet.

Some ministers believe that Duke’s “inexplicit response to questions on Jega’s fate” last Friday has been heating up the polity.

Duke said although the President has no plan to sack Jega, ‘’this is not to say that, if it is time for INEC chairman to naturally exit his office, then the natural course of public service rule will not take place when he has reached the age of retirement or exhausted his tenure.”

According to a source, the legal advice emphatically said “political appointees are not subject to terminal leave”.

The source added: “I think we have been having this apprehension on Jega’s fate because of the politics which beclouded non-renewal of the tenure of ex-INEC Chairman Prof. Maurice Iwu.

“I think in managing Iwu’s exit, those behind it did not look at the legality of the process in asking him to proceed on leave.”

The source also said the Presidency was advised against allowing Jega to go on terminal leave because the “timing of the agitation is inauspicious and non-strategic”.

A top government official said: “President Goodluck Jonathan will not remove or ask Jega to proceed on terminal leave. He has told the nation of his position and he will stand by his words.”

At INEC, however, a woman National Commissioner is still feeling bad that she was linked to the plot against Jega.

“The National Commissioner has been psychologically disturbed that she is being associated with treachery.

“Were it not for pressure, she would have addressed the press with some commissioners on why they are standing by Jega,” a source said.

Duke’s comment is said to have caused disquiet in the cabinet.

“Everyone is disturbed that Edem Duke was not circumspect enough because as a Minister of Information, he ought to know that the press will take note of what is said, intended or unsaid,” a source said, adding:

“No one is happy that the story about Jega has been bordering on alleged plot to remove or ask him to go on terminal leave by the President. We believe as cabinet members, we should also not heat up the polity or create an image crisis for this administration. If you have noticed, the debate on Jega’s fate heightened after Duke’s briefing last Friday.

“Not all members of the cabinet approved of Duke’s comments, which left a few things hanging.”

Instead, the INEC chairman has deployed all National Commissioners and the 37 REC in 12 states for the mock election taking place on Saturday.

The mock election will be used for “field testing of the functionality of the Smart Card Readers”.

“The session between INEC chairman and RECs  will now hold next week to enable the commission to consider the report on the mock election.”

House of Representatives Speaker Aminu Tambuwal said we cannot play the ostrich with the plot to scuttle the elections.“It is clear that some people are not interested in a free and fair election.”

Tambuwal, who spoke when he received a delegation from the Situation Room Advocacy also condemned any move to install an interim government which he said will amount to a coup because it has no place in the constitution.

Also yesterday, the House of Representatives  sounded a note of warning to President Goodluck Jonathan’s administration on the danger of removing the INEC chairman before the general elections.

To show its seriousness, the threatened to initiate court action within the country and at the International Criminal Court (ICC), over supposed plots to remove Jega and shift the March 28th and April 11th elections.

The resolution of the House followed the adoption of the prayers of a motion by Hon. Ali Ahmad, Chairman House Committee on Justice,

The “Motion on threat to further tamper with the status quo arrangements for the 2015 general elections” was seconded by Hon. Goni Bukar

The House urged “the political class, government of the federation and of states and security agencies to heed the warning of imminent and present danger associated with any interference with the existing schedules of the general elections”.

It said it will “hold personally accountable at domestic judicial forum or at the International Criminal Court “ any person or Organisation that foists on INEC any decision or action whatsoever, including unconstitutional attempt to remove the current INEC chairman, that has the effect of making it impracticable for the elections to hold on 28th March and 11th April, 2015”.

Arguing the motion, Ahmad  said the initial postponement of the general elections for six weeks due to security concerns related to the Boko Haram insurgency has further heightened the tempo for pre-election violence.

He expressed concern on the possibility, threat and insinuation to precipitate actions that would cause further alteration to the status quo arrangement and regulation of the general elections

Ahmad said: “That such threats to tamper with the status quo may take several forms including , but not limited to, illegal removal of the current INEC Chairman.

“That there is already documented evidence from several sources that any change in status quo arrangements, especially removal of the INEC chairman, presents a possibility of violence and would occasion the sowing of seeds of a major crisis,” he said.

The lawmaker said civil society organisations and lawyers, including usually reticent Senior Advocates of Nigeria have sounded “a note of warning” and threatened a “showdown”.

According to him, such removal will be unconstitutional, “given the decision of the Supreme Court that removal of the chairman or members of such an independent electoral body as INEC pursuant to S.157 (1) of the Constitution can only be achieved when two things happen, viz: (a) for his inability to discharge the functions of the office, or ( b) for misconduct, as determined by 2/3 majority of the Senate ( Governor of Kwara State v. Ojiabor. 2007).”

Ahmad said such deliberately induced violence “ may snowball as it did in 2011 post-election period into widespread or systematic attack, persecution, arson, murder, thereby amounting to serious crimes of concern to the international community, as contained in Article 5 of the 1998 Rome Statute of the International Criminal Court, to which Nigeria is a signatory.”

However, the Deputy Leader of the House, Leo Ogor, objected to the motion, saying that it was “totally speculative” at best and should not even be entertained, not to mention being passed.

His objection was overruled by Speaker Aminu Tambuwal, who  called for a voice vote. It was unanimously passed by members.

Jamb updates: 10 POSSIBLE QUESTIONS ON THE LAST DAYS AT FORCADOS HIGH SCHOOL, A MUST READ BY ALL JAMB STUDENTS

Jamb updates: 10 POSSIBLE QUESTIONS ON THE LAST DAYS AT FORCADOS HIGH SCHOOL, A MUST READ BY ALL JAMB STUDENTS

Blame Me For APC Loss In EDO — Buhari Reveals